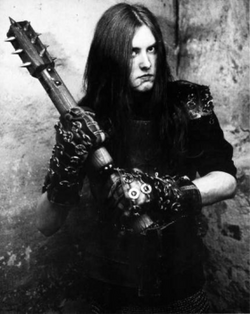 Varg Vikernes (Also known also Varg, Vargy-poo, and Varg for Vendetta) Varg decided to dedicate his life to Black Metal after his parents forced him to go to church as a kid. Since there was no /r/athiesm at the time, Varg decided to do the next best thing and burn them sonsabitches to the ground so he wouldn't have to spend another hour on sunday listening to boring shit nobody cares about.

After getting pissed off at the church because there's nothing else to fucking do in Norway besides waiting for the snow to melt, he decided to end winter once and for all by adopting Part 2 of the OFWGKTA doctrine: Burn Shit. After that, Varg was known as "The Grinch Who Burned Down our Community Gathering Place".

Once that was completed, he wiped the dirt from his hands, got arrested, got released, and decided to kill his bandmate Oyster "Anonymous" Arthas, because fuck it, why not? Also, Oyster apprently started it so Varg went Mortal Kombat on his ass and FINISHED HIM, thus completing Part 1 of the OFWGKTA doctrine: Kill People. [whoever wrote this part should consider retaking middle school until they grow into an adult]

Soon after, Varg would complete Part 3 and fuck school forever by going to jail. However, since Norwegian prisons are pretty much hotels which you can't leave, Varg found himself growing out of black metal and changing his ways yet still keeping his viewpoints which is cool I guess.