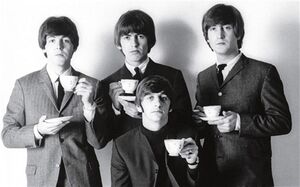 The Beatles were an iconic rock group from Liverpool, England made up of George Harrison, John Lennon, Paul McCartney and Ringo Starr.

The fact that so many books still name the Beatles "the greatest or most significant or most influential" rock band ever only tells you how far rock music still is from becoming a serious art. Jazz critics have long recognized that the greatest jazz musicians of all times are Duke Ellington and John Coltrane, who were not the most famous or richest or best sellers of their times, let alone of all times. Classical critics rank the highly controversial Beethoven over classical musicians who were highly popular in courts around Europe. Rock critics are still blinded by commercial success: the Beatles sold more than anyone else (not true, by the way), therefore they must have been the greatest. Jazz critics grow up listening to a lot of jazz music of the past, classical critics grow up listening to a lot of classical music of the past. Rock critics are often totally ignorant of the rock music of the past, they barely know the best sellers. No wonder they will think that the Beatles did anything worth of being saved.

In a sense the Beatles are emblematic of the status of rock criticism as a whole: too much attention to commercial phenomena (be it grunge or U2) and too little attention to the merits of real musicians. If somebody composes the most divine music but no major label picks him up and sells him around the world, a lot of rock critics will ignore him. If a major label picks up a musician who is as stereotyped as one can be but launches her or him worldwide, your average critic will waste rivers of ink on her or him. This is the sad status of rock criticism: rock critics are basically publicists working for free for major labels, distributors and record stores. They simply publicize what the music business wants to make money with.  TL;DR

Hopefully, one not-too-distant day, there will be a clear demarcation between a great musician like Tim Buckley, who never sold much, and commercial products like the Beatles. And rock critics will study more of rock history and realize who invented what and who simply exploited it commercially.

Contemporary musicians never spoke highly of the Beatles, and for a good reason. They could not figure out why the Beatles' songs should be regarded more highly than their own. They knew that the Beatles were simply lucky to become a folk phenomenon (thanks to "Beatlemania", which had nothing to do with their musical merits). THat phenomenon kept alive interest in their (mediocre) musical endeavours to this day. Nothing else grants the Beatles more attention than, say, the Kinks or the Rolling Stones. There was nothing intrinsically better in the Beatles' music. Ray Davies of the Kinks was certainly a far better songwriter than Lennon & McCartney. The Stones were certainly much more skilled musicians than the 'Fab Fours'. And Pete Townshend was a far more accomplished composer, capable of "Tommy" and "Quadrophenia". Not to mention later and far greater British musicians. Not to mention the American musicians who created what the Beatles later sold to the masses.

The Beatles sold a lot of records not because they were the greatest musicians but simply because their music was easy to sell to the masses: it had no difficult content, it had no technical innovations, it had no creative depth. They wrote a bunch of catchy 3-minute ditties and they were photogenic. If somebody had not invented "beatlemania" in 1963, you would not have wasted five minutes of your time to read a page about such a trivial band. Note of 2010. The Beatles were not a terribly interesting band, but their fans were and still are an interesting phenomenon. I can only name religious fundamentalists as annoying (and as threatening) as Beatles fans and as persevering in sabotaging anyone who dares express an alternative opinion on their faith. They have turned me into some kind of Internet celebrity not because of the 6,000 bios that i have written, not because of the 800-page book that i published, not because of 30 years of cultural events that i organized, but simply because i downplayed the artistic merits of the Beatles, an action that they seem to consider as disgraceful as the 2001 terrorist attacks.

Jakub Krawczynski sent me this comment in 2010: I find it quite amusing that almost all of the Beatles songs have their own entries on wikipedia (nothing wrong with that in itself, actually), even if they are not singles, and each of them is meticulously dissected as if there were transcendental suites exceeding human comprehension, yet bands like Faust or Red Krayola, etc. have biographies even shorter than just one article about any random Beatles song. Needless to say, none of their songs have any articles on them, yet I'm sure there would be a lot more to talk about. Moreover, if you had put any bad review of their album on the site with the intention to show the broader scope of opinions, you'd risk your "life" there, since such fanatics don't accept any single sign of trying to be objective. You are seen as public enemy number 1 to them. It's like your article is one giant cognitive dissonance to them and vandalizing your bio was the only way to reduce this dissonance. (Italian text translated by Ornella C. Grannis)

The Beatles most certainly belong to the history of the 60s, but their musical merits are at best dubious.

The Beatles came to be at the height of the reaction against rock and roll, when the innocuous "teen idols", rigorously white, were replacing the wild black rockers who had shocked the radio stations and the conscience of half of America. Their arrival represented a lifesaver for a white middle class terrorized by the idea that within rock and roll lay a true revolution of customs. The Beatles tranquilized that vast section of people and conquered the hearts of all those (first and foremost the females) who wanted to rebel without violating the societal status quo. The contorted and lascivious faces of the black rock and rollers were substituted by the innocent smiles of the Beatles; the unleashed rhythms of the first were substituted by the catchy tunes of the latter. Rock and roll could finally be included in the pop charts. The Beatles represented the quintessential reaction to a musical revolution in the making, and for a few years they managed to run its enthusiasm into the ground.

Furthermore, the Beatles represented the reaction against a social and political revolution. They arrived at the time of the student protests, of Bob Dylan, of the Hippies, and they replaced the image of angry kids with their fists in the air, with their cordial faces and their amiable declarations. They came to replace the accusatory words of militant musicians with overindulgent nursery rhymes. In this fashion as well the Beatles served as middle-class tranquilizers, as if to prove the new generation was not made up exclusively of rebels, misfits and sexual maniacs.

For most of their career the Beatles were four mediocre musicians who sang melodic three-minute tunes at a time when rock music was trying to push itself beyond that format (a format originally confined by the technical limitations of 78 rpm record). They were the quintessence of "mainstream", assimilating the innovations proposed by rock music, within the format of the melodic song.

The Beatles belonged, like the Beach Boys (whom they emulated for most of their career), to the era of the vocal band. In such a band the technique of the instrument was not as important as the chorus. Undoubtedly skilled at composing choruses, they availed themselves of producer George Martin (head of the Parlophone since 1956), to embellish those choruses with arrangements more and more eccentric.

Thanks to a careful publicity campaign they became the most celebrated entertainers of the era, and are still the darlings of magazines and tabloids, much like Princess Grace of Monaco and Lady Di.

The convergence between Western polyphony (melody, several parts of vocal harmony and instrumental arrangements) and African percussion - the leitmotif of American music from its inception - was legitimized in Europe by the huge success of the Merseybeat, in particular by its best sellers, Gerry and the Pacemakers and the Beatles, both produced by George Martin and managed by Brian Epstein. To the bands of the Merseybeat goes the credit of having validated rock music for a vast audience, a virtually endless audience. They were able to interpret the spirit and the technique of rock and roll, while separating it from its social circumstances, thus defusing potential explosions. In such fashion, they rendered it accessible not only to the young rebels, but to all. Mediocre musicians and even more mediocre intellectuals, bands like the Beatles had the intuition of the circus performer who knows how to amuse the peasants after a hard day's work, an intuition applied to the era of mass distribution of consumer goods.

Every one of their songs and every one of their albums followed much more striking songs and albums by others, but instead of simply imitating those songs, the Beatles adapted them to a bourgeois, conformist and orthodox dimension. The same process was applied to the philosophy of the time, from the protest on college campuses to Dylan's pacifism, from drugs to the Orient. Their vehicle was melody, a universal code of sorts, that declared their music innocuous. Naturally others performed the same operation, and many (from the Kinks to the Hollies, from the Beach Boys to the Mamas and Papas) produced melodies even more memorable, yet the Beatles arrived at the right moment and theirs would remain the trademark of the melodic song of the second half of the twentieth century.

Their ascent was branded as "Beatlemania", a phenomenon of mass hysteria launched in 1963 that marked the height of the "teen idol" mode, a extension of the myths of Frank Sinatra and Elvis Presley. From that moment on, no matter what they put together, the Beatles remained the center of the media's attention.

Musically, for what it's worth, the Beatles were the product of an era that had been prepared by vocal groups such as the Everly Brothers and by rockers such as Buddy Holly; an era that also expressed itself through the girl-groups, the Tamla bands and surf music. What the Beatles have in common with them, aside from almost identical melodies, is a general concept of song: an exuberant, optimistic and cadenced melody.

The Beatles were the quintessence of instrumental mediocrity. George Harrison was a pathetic guitarist, compared with the London guitarists of those days (Townshend of the Who, Richards of the Rolling Stones, Davies of the Kinks, Clapton and Beck and Page of the Yardbirds, and many others who were less famous but no less original). The Beatles had completely missed the revolution of rock music (founded on a prominent use of the guitar) and were still trapped in the stereotypes of the easy-listening orchestras. Paul McCartney was a singer from the 1950s, who could not have possibly sounded more conventional. As a bassist, he was not worth the last of the rhythm and blues bassists (even though within the world of Merseybeat his style was indeed revolutionary). Ringo Starr played drums the way any kid of that time played it in his garage (even though he may ultimately be the only one of the four who had a bit of technical competence). Overall, the technique of the "fab four" was the same of many other easy-listening groups: sub-standard.