View source
IF YOU WANT TO DOWNLOAD AN ALBUM, SEARCH THE ARCHIVE FOR THE ALBUM OR ARTIST NAME AND "MEGA" OR "ZIPPYSHARE" ETC., LIKE SO, OR READ THIS PAGE. PLEASE DON'T MAKE A THREAD ON /mu/, ASKING FOR SOMEONE TO GIVE YOU A LINK TO AN ALBUM, OR ASKING FOR ANY GOOD PLACES TO DOWNLOAD MUSIC FROM.

/mu/ IS NOT A PERSONAL MUSIC REQUEST SERVICE.

Last.fm also features something called a shoutbox, which allows you to leave 'shouts' (comments) on other people's profiles. You can use this to discuss music on a more personal level with friends that you meet (in real life or on the internet), ask for recommendations or just make general small talk. The final major feature of last.fm is the radio. The radio allows you to listen to music based around any classification you see fit, be it a genre, artist, album, song or another last.fm user, though it is currently a service that has to be paid for via a subscription in most countries, with only a 50-song free trial being available in most countries. The subscription also gives other various benefits, such as the ability to see who visits your profile.

From the FAQ: "Rate Your Music (RYM) is an international metadata database where musical albums, EPs, singles, videos and bootlegs (collectively referred to as "releases") are added, rated, and reviewed by users. This data is then used to generate automatic music recommendations for users, create lists of compatible users, and to create lists of top-rated music albums. Weighted averages are used to calculate the ordering for these lists; regular members who write reviews and rate more albums have a greater weight applied to their ratings.

Because users can add, rate and review any album they know of without site approval, RYM can be used to quickly and easily to rate any music collection. A welcome side effect of this policy is that the RYM database is extremely diverse, limited only by the collective knowledge of its users.

RYM is also a community, with extensive message boards and the ability to send private messages and music recommendations to other users."

Discogs is a website that is mainly for cataloging music. As a music listener, it can be an invaluable tool for finding correct tags for your files. Discogs also provides comprehensive information on album editions (useful if an album's content varies over time or different formats), release formats, band member history and side projects, label catalogs and much more. Discogs also features a recommendation system, which consists of a list of recommended albums at the end of an album's page, but it's more useful really as a music catalog. Discogs also features a very large user-run marketplace, where you can buy and sell physical formats of music. Sellers and buyers have feedback scores and ratings as well as user stores, and items are graded on their condition, much like eBay. Music is also available in digital formats, if that's your thing.

If you wish to add your own blog to the list, simply edit this page in source mode and add

to the list. Once you enter source mode, it should be a lot easier to understand.

Despite the continual legal pursuit of music file-sharing "criminals" by the RIAA, the ability to find great music and create a significant music library on Last.fm at virtually no cost is still quite feasible. So we'll start by dividing this into categories and giving a few examples of what we know.

A number of the sites in this list do not directly support scrobbling to your Last.fm-profile, some workarounds are:

Looking at the roster of artists signed to a record label is an option that a lot of people overlook. By looking at what record label an artist is/was signed up to, you can find new artists that are/were also signed up. A lot of smaller record labels tend to specialize in certain genres, and they can tend to try to maintain a particular style or quality amongst the musicians they sign. Some suggested record labels include: 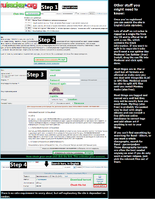 Guide to getting into what.cd

Music Players And Other Useful Software

Many people wonder what the best music player is for their OS. The best way to find a music player for you is to try several for 2-3 days and choose the one you like the best. The Well-Tempered Computer is a website that can be used to help with choosing a media player, as well as giving background on various other aspects to setting your computer up for music listening. A good website for finding alternative software choices is alternativeto.net.

Please check the archive before asking for a specific album: http://rbt.asia/mu/

First, you need a last.fm account and a history of scrobbles to start. Then, head over to www.tapmusic.net/lastfm, type in your last.fm account name, and it'll generate a collage.

4/6
+ Souvlaki, Cross, Deathconsciousness, On Avery Island
- Hospice, Is This It

Or, if you prefer, simply this:

*Note: there is some use of ~ instead of a + or -, which denotes only partially liking an album. This is the equivalent of 0.5 of an album when giving numerical ratings.

Chart threads consist of users posting their top 40/42/100 or collage of their favorite albums which are then rated or given recommendations upon.

Charts can be made at neverendingchartrendering.org.

This site automatically saves your charts as cookies the moment you create them, so you can update them or import/export them for safe keeping at anytime.

Occasionally /mu/ will listen to albums together at the same time. Usually when an album first comes out or on an anniversary of an album release. The OP of the thread posts a link to the download of the album and a time to start at (xx:15 would be at 15 minutes past the hour) Everyone then syncs up with http://time.is/New_York and presses play when the time comes. An example of a giant listen-along is muchella.