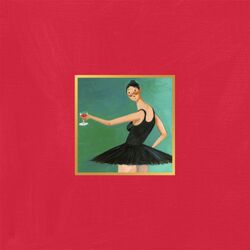 MBDTF started after Kanye pulled a Kanye at the VMAs and was hit with a huge backlash of public opinion, with many people wondering if this stunt signalled the end of Yeezy's popularity, because NOBODY messes with T-Swift.

After breaking into tears while being interviewed by Jay Leno, of all people, Kanye did what most of us would do: fly to Hawaii and indefinitely rent out the entirety of Avex Recording Studio to record a new album, the same studio he used for the 808s and Heartbreak sessions.

While in Hawaii, Kanye spent over $3,000,000 recording the album, a huge of chunk of which was spent flying in absolutely everybody he could think of to work on the album with him, including Justin Vernon aka Bon Iver, because after hearing the thug anthems on For Emma, Forever Ago, Kanye, like the rest of us, knew that Bon Iver was an OG.

When he finished recording the album, Kanye released most of the tracks for free, one at a time, on what he called GOOD Friday.  This did not help people to forget his autistic Jesus complex.

Eventually, the actual My Beautiful Dark Twisted Fantasy was released and Pitchfork gave it a light 10, causing /mu/ to go absolutely insane.

What To Listen For[]

This album isn't very 2deep4u, but it also doesn't sound much like other rap out there- this is Kanye's world we're in now, and this album isn't meant to be an introduction to him.  You should have listened to all of his studio albums since they're all good anyway, but at the very least listen to Late Registration and 808s and Heartbreak to really get where he's coming from.

The lyrical themes are excess, decadence, the nature of celebrity, pleasure, and being unable to find happiness, each of which focus on Kanye himself.  Track by track, Kanye tears himself to pieces until you actually feel bad for the guy on "Runaway".  Think about that- you feel bad for KANYE WEST.

The production on this album is second to none, so just get lost in it and enjoy the album.