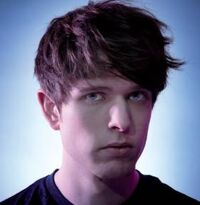 James Blake an electonic artist/singer-songwriter hailing from the UK as well as a grade-A cutie patootie. His 2011 self-titled release was well recepted among various critics and earned him a fairly large fanbase. His most noticable accomplishment has been the "James Blake," the haircut he so loving displays. The haircut now exceeds his own fame. He is no longer in contact with his siblings, but he doesn't hold it against them.

Blake is a known poonhound, and is not somebody to allow free conversation with your current or prospective mating partner.