Emo is a genre derived from punk/hardcore punk. It is well defined and has quite a devoted following on /mu/. If this is your idea of emo, you're sorely wrong. The actual artists and fans of emo look more like this.

The artists one will find most often in any emo sharethread (and the best place to start) include:

There is general agreement that the origins of Emo grew out of the Washington, D.C. area Hardcore Punk scene, as former punk rockers looked for new forms of expression and formed the bands Rites of Spring and Embrace. The scene quickly spread to California, then across the landscape. The early Emo scene (1984-1989) sound featured mid-tempo, rock based guitar with an occassional flourish riff, and punk vocals that were sung rather than yelled. Emo was at this point still largely underground.

A second wave of emo bands like Moss Icon emerged around the turn of the decade, and introduced new elements to the sound. The quiet/loud dynamic became popular, as well as catchy riff based songs featuring octave chords, pop song structure, and more mainstream, clean vocals. It could be argued that the genre's first breakout band was Sunny Day Real Estate, and this style of Emo is what has stuck in many people's heads as definitive of the style, although during this same period bands like Mohinder were playing a more abrasive, punkish Emo featuring staccato, distortion-wracked music over screamed vocals. A divergence was already apparent.

From the mid-90s onward, this style of indie/post-rock-leaning Emo remained the larger sect, and spawned armies of like-minded bands. Though far removed from its roots, this incarnation has expanded the Emo fanbase into a major demographic as groups like The Get Up Kids and Dashboard Confessional carry the style toward the pop commercialism that its originators detested.

Emo at its core[]

Since its origination in the mid-80s, Emo has undergone many changes both stylistically and in the public perception of what exactly the term means. To attempt to nail down a singular standard for all Emo here would be folly, as no such thing exists. The unifying factor that makes emo (short for emotional) what it is, is a determination to use deeply personal and sincerely expressed feelings the central theme, whether that be through furious anger and personal climax or by heartfelt confession and poetic crooning.

Emocore is a style of Post-Hardcore that emerged primarily in Washington D.C. in the summer of 1985, as a reaction against the by then stagnant Hardcore Punk scene. Most of the bands were composed of former hardcore musicians, and they used that genre as a basis for the new emocore sound. The shouted vocals and fast distorted guitars of hardcore punk were set to midtempo songs that focused more on melodies and dynamics than aggression and speed, and the lyrics were often introverted and emotional which had previously been uncommon in the punk rock scene. Emocore led to the creation of...

Screamo is an intense offshoot of Emo that began in the early 1990s. It merges the emotional lyrics and melodicism of Emo with the intensity, aggression and speed of Hardcore Punk. Songs tend to be short in length but complex in structure, often featuring many changes in tempo and rhythm. As such, the style shares some similarities with Powerviolence, another hardcore punk subgenre that developed around the same time.

The music tends toward alternating loud and soft dynamics; off-key, strained or "whiny" vocals with little screaming; and "twinkly" arpeggiated guitar parts. The genre's name stems from its high prevalence in cities such as Chicago, Madison, Kansas City and Cleveland, but the style is in no way limited to the Midwest, as exemplified by Sunny Day Real Estate and Texas is the Reason.

Emo-pop is a style of music that had its origins in the Midwest Emo movement of the 1990s. emo-pop took the sentimental crooning of Emo and crafted it into a sound with more mainstream appeal. As a result, the songs are more pop-oriented than those of earlier movements associated with emo, utilizing such elements as high production values, reliance on hooks, simple structures, and high-pitched melodies and singing. The simplistic and youthful nature of Pop Punk also played a huge role in crafting the sound of emo-pop. In addition, the genre distances itself from the hardcore-based Emocore movement of the 1980s, both musically and philosophically. Lyrics tend to be confessional in nature, often delving into topics such as heartbreak and love.

Influential bands: Jimmy Eat World, The Get Up Kids, Taking Back Sunday, The Promise Ring

Come on son, you know who these guys are. Seminal band in the second wave of emo, introducing the sound of "twinkly" open-tuned guitars and a major decline in punk influence. Originally only put out a single album and EP in the late 90s and barely played any shows before breaking up, the band reunited in 2014 and have since become a re-established band with a sound more akin to slowcore and more recently dreamy "post-rock."

Probably one of the more influential emo bands, Cap'n Jazz only released one album with a title too long to remember and a few EPs along with a christmas carol before breaking up. All their recorded songs were eventually released on the compilation Analphabetapolothology which catapulted them into posthumous fame and is probably their most well known release and the easiest to track down unless you like monitoring Discogs for a year in the hope of buying a ridiculously expensive record before some other basement dwelling nerd does. They're also notable for being the first band of Tim and Mike Kinsella who later went on to form other emo and emo-adjacent bands like American Football, Owls, Owen (Mike Kinsella Solo), and Joan of Arc (Tim's masterclass art rock band), while other bandmates formed The Promise Ring and Ghosts and Vodka.

A combination of math, twinkly, and midwestern emo with shouted vocals. Snowing has gained a massive cult following in the emo community. Probably the best thing about Snowing is that they released all their music for free. Their demo tape "Fuck Your Emotional Bullshit" is only 5 songs. They released an LP entitled I Could Do Anything I Wanted If I Wanted. Snowing broke up in 2011 and played their final show in a church, but they got back together and released an album called "That Time I Sat In A Pile Of Chocolate" in 2016.

Starting out as a pop-punk rival band of Taking Back Sunday, Brand New has great prominence in both the emo and alternative rock scene. Lyrically driven, with amazing song composition in their later albums. Commonly mistaken as a mainstream band, Brand New has been on the fringe, living in the shadows of the associated act Taking Back Sunday. They've received a large cult following in the online music scene. Highlights include the more pop oriented "Deja Entendu", and rock oriented "The Devil And God Are Raging Inside Me".

A band formed in the late 2000s that majorly pushed the boundaries of emo. Incorporating the sounds of lo-fi, experimental and progressive rock, and even ska arguably the band is a one of a kind group. They are the brainchild of multi-talented Adam Demirjian who was the main songwriter, singer, guitarist, and drummer for the group. Adam was only a teenager when the band was making their genre-pushing music. Their last full length "Just Got Back From The Discomfort-We're Alright" from 2010, is considered by some to be one of the best examples of modern emo and emo as a whole. They released a few EPs and two LPs before breaking up around 2011. Adam currently plays in the band Me In Capris. You can often find them being discussed on /mu/.

One of the OGs of the recent emo "revival", they're more in line with bands in the vein of American Football rather than the more recent Twinkle Daddies style bands like Snowing and Algernon Cadwallader. They've got two LPs out and another coming out this year.

Empire! Empire! I Was a Lonely Estate[]

Another essential band of the semi-recent emo revival featuring the very depressed Keith Latinen and his wife along with some other nerds that no one cares about. They're influenced by bands like American Football and Mineral along with more recent emo acts with regards to Keith's whiny sadboi vocals. They also run Count Your Lucky Stars Records who, along with Topshelf, sign any emo band worth giving a shit about.

They used to be cool and American Radass was the flavour of the month on /mu/ when it was released but then the fat guy stopped being fat and now they're massive dicks that no one likes. Having said that, their sound featured a blend of modern indie rock and emo balladry with strong vocal lines and a rare two-piece dynamic for the genre. Any attempt to discuss them on /mu/ will be met with posts saying "Fuck Dads" nowadays.

One of those bands who thought Cap'n Jazz were onto something with obnoxiously long album names and called themselves something which is so fucking long that the even the acronym is a pain to type. Their sound is best described as twinkle daddies meets post-rock. Their split with Deer Leap and Whenever, If Ever are good and worth a listen, skip Between Bodies though unless you enjoy atrocious "CRAWLING IN MY SKINNNNNN" tier spoken word lifted out of the diary of a teenage Gerard Way. Feel free to talk shit about them on their Facebook page, they get off on that.

The same members of Cap'n Jazz minus Davey, one of their guitarists. Owls is much more of an art rock and math rock band than an emo band, but their sound is still undeniably "emo-like" with Tim Kinsella's signature vocals and Victor Villarreal's noodley guitar playing. Owls is its own beast but if you're really into Cap'n Jazz you will probably like them too if you're open to them going for a more out-there sound. Genres aside, the album is one the best things to come out of the Kinsella brother discography.

Often called a Cap'n Jazz cover band by their h8rs but they have enough unique elements to stand out, even if their guitar riffs, vocals, and lyrics all reek of Kinsella. They were probably one of the bigger emo bands of the mid two thousands but broke up after a couple of records. They only released two LPs, an EP and a demo but they're all solid and worth listening to.

Cool dudes who play more the more aggressive, mathy emo that the recent revival seems to have forgotten was a thing. Just Married is a classic that depressed little nerd should listen to along with An Obscure Moon Lighting an Obscure World. Good luck finding their other releases though as they seemed to have disappeared from the internet outside of their bandcamp. Let's be honest though, if you had the money to spend on actually buying albums then you wouldn't be nearly sad enough to be a ~trve emo~.

One of the earlier emo bands and errs more on the side of post-hardcore, though they're still an iconic act. Their whole catalog is worth a listen, especially Frame and Canvas, skip their recent reunion though, it wasn't very good. 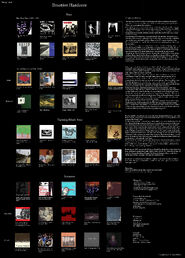 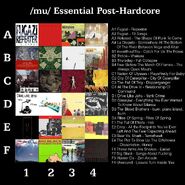