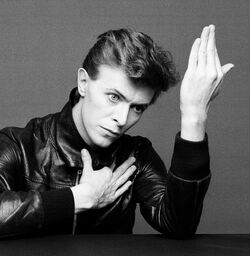 David Robert Jones (born 8 January 1947 - died 10 January 2016), known by his stage name David Bowie was an English singer-songwriter, musician, actor and record producer. As a leading figure in the music industry for over four decades, he is regarded as one of the most influential musicians of the 20th century, with his music and stagecraft having a significant impact on popular music. He was acclaimed by critics and musicians, particularly for his innovative work during the 1970s. He was known for his distinctive voice, as well as the intellectual depth and eclecticism of his work. (From Wikipedia)

The "cliché" about David Bowie says he's a musical chameleon, adapting himself according to fashion and trends. While such a criticism is too glib, there's no denying that Bowie demonstrated remarkable skill for perceiving musical trends at his peak in the '70s. After spending several years in the late '60s as a mod and as an all-around music-hall entertainer, Bowie reinvented himself as a hippie singer/songwriter. Prior to his breakthrough in 1972, he recorded a proto-metal record and a pop/rock album, eventually redefining glam rock with his ambiguously sexy Ziggy Stardust persona. Ziggy made Bowie an international star, yet he wasn't content to continue to churn out glitter rock. By the mid-'70s, he developed an effete, sophisticated version of Philly soul that he dubbed "plastic soul," which eventually morphed into the eerie avant-pop of 1976's Station to Station. Shortly afterward, he relocated to Berlin, where he recorded three experimental electronic albums with Brian Eno. At the dawn of the '80s, Bowie was still at the height of his powers, yet following his blockbuster dance-pop album Let's Dance in 1983, he slowly sank into mediocrity before salvaging his career in the early '90s. Even when he was out of fashion in the '80s and '90s, it was clear that Bowie was one of the most influential musicians in rock, for better and for worse. Each one of his phases in the '70s sparked a number of subgenres, including punk, new wave, goth rock, the new romantics, and electronica. Few rockers ever had such lasting impact. (from Allmusic)

From the time of his earliest recordings in the 1960s, Bowie has employed a wide variety of musical styles. His early compositions and performances were strongly influenced by not only rock and rollers like Little Richard and Elvis Presley but also the wider world of show business. He particularly strove to emulate the British musical theatre singer-songwriter and actor Anthony Newley, whose vocal style he frequently adopted, and made prominent use of for his 1967 debut release, David Bowie (to the disgust of Newley himself, who destroyed the copy he received from Bowie's publisher). Bowie's music hall fascination continued to surface sporadically alongside such diverse styles as hard rock and heavy metal, soul, psychedelic folk and pop.

Musicologist James Perone observes Bowie's use of octave switches for different repetitions of the same melody, exemplified in his commercial breakthrough single, "Space Oddity", and later in the song "Heroes", to dramatic effect; Perone notes that "in the lowest part of his vocal register ... his voice has an almost crooner-like richness."

Voice instructor Jo Thompson describes Bowie's vocal vibrato technique as "particularly deliberate and distinctive". Schinder and Schwartz call him "a vocalist of extraordinary technical ability, able to pitch his singing to particular effect." Here, too, as in his stagecraft and songwriting, the singer's chamaeleon-like nature is evident: historiographer Michael Campbell says that Bowie's lyrics "arrest our ear, without question. But Bowie continually shifts from person to person as he delivers them ... His voice changes dramatically from section to section."

Bowie's innovative songs and stagecraft brought a new dimension to popular music in the early 1970s, strongly influencing both its immediate forms and its subsequent development. A pioneer of glam rock, Bowie, according to music historians Schinder and Schwartz, has joint responsibility with Marc Bolan for creating the genre. At the same time, he inspired the innovators of the punk rock music movement—historian Michael Campbell calls him "one of punk's seminal influences". While punk musicians trashed the conventions of pop stardom, Bowie moved on again—into a more abstract style of music making that in turn became a transforming influence. Biographer David Buckley writes, "At a time when punk rock was noisily reclaiming the three-minute pop song in a show of public defiance, Bowie almost completely abandoned traditional rock instrumentation." Bowie's record company sought to convey his unique status in popular music with the slogan, "There is old wave, there is new wave, and there is Bowie ..." Musicologist James Perone credits him with having "brought sophistication to rock music", and critical reviews frequently acknowledge the intellectual depth of his work and influence.

Buckley writes that, in an early 1970s pop world that was "Bloated, self-important, leather-clad, self-satisfied, ... Bowie challenged the core belief of the rock music of its day." As described by John Peel, "The one distinguishing feature about early-70s progressive rock was that it didn't progress. Before Bowie came along, people didn't want too much change." Buckley says that Bowie "subverted the whole notion of what it was to be a rock star", with the result that "After Bowie there has been no other pop icon of his stature, because the pop world that produces these rock gods doesn't exist any more. ... The fierce partisanship of the cult of Bowie was also unique—its influence lasted longer and has been more creative than perhaps almost any other force within pop fandom." Buckley concludes that "Bowie is both star and icon. The vast body of work he has produced ... has created perhaps the biggest cult in popular culture. ... His influence has been unique in popular culture—he has permeated and altered more lives than any comparable figure."

Bowie was inducted into the Rock and Roll Hall of Fame in 1996.[104] Through perpetual reinvention, he has seen his influence continue to broaden and extend: music reviewer Brad Filicky writes that over the decades, "Bowie has become known as a musical chameleon, changing and dictating trends as much as he has altered his style to fit, influencing fashion and pop culture."Biographer Thomas Forget adds, "Because he has succeeded in so many different styles of music, it is almost impossible to find a popular artist today that has not been influenced by David Bowie."