Centipede Hz is Animal Collective's ninth album, released on September 4, 2012. It features the return of Deakin, who had previously left the group in 2007 due to personal reasons (heroin addiction), and did not perform in the group's previous record, Merriweather Post Pavilion. The record marked a return to the group's more experimental roots, and as such had quite a polarizing reception.

In 2011, the band reconvened in Maryland and wrote the album's songs in a barn near Deakin's house. This was the first time in a long time that the members had written songs together in person, as the songs in Merriweather Post Pavilion had been famously traded through e-mail before they went in to record them together. Avey Tare noted that returning to Baltimore had an influence in the sound of the album. According to the band, they had a concept of an alien band trying to replicate human music when writing the songs as well. The group was also inspired by radio, and this is audible in the use of white noise and radio announcements in the album. The album features 2 Panda Bear songs. "New Town Burnout," was an outtake from his solo album, Tomboy. It also features Deakin's first singing and songwriting contribution on an album in "Wide Eyed."

In May 2012, the band released a double A-side single, "Honeycomb"/"Gotham", two outtakes from the album. Leading up to the release of the album, the band streamed 4 radio broadcasts, each curated by one of the band members. Prior to the stream of the album, someone accidentally leaked the song "Applesauce" while testing the stream. When the stream happened, the mods were merciful enough to create a sticky on /mu/ that got over 3,000 posts, mainly with people spamming the lyrics and talking about how it would be the album of the year, and the first album to get a score higher than 10 from Pitchfork. However, when Pitchfork and Fantano both gave the album less-than-expected scores, everyone proceeded to hate it.

"[In their previous albums] There's a sense of something special being slowly revealed, of chaotic rhythms, harmonies, and atmospheres gradually cohering into glorious moments of clarity before dissolving into the ether. Centipede Hz, by comparison, feels like someone throwing a burrito on your windshield: The songs hit with a jolt, instantly splaying all their ingredients before you." - Stuart Berman

In Pitchfork's review of Centipede Hz, reviewer Stuart Berman infamously compared the music to having a burrito thrown on your windshield. Many passed the comment off as ridiculous, which is not that big of a deal considering Pitchfork already have a reputation for outlandish writing. However, some clever /mu/tants did some research, and found there was more to the scoring than was initially assumed. This flourished into the Burritogate, a p4k conspiracy involving throwing burritos at Berman's car and the significance of 7.4. The thread can be found Here 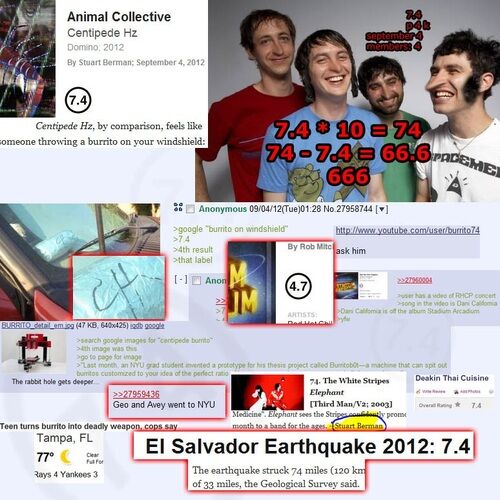