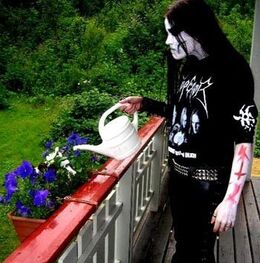 Black Metal (also known as Trve Kvlt Shit) is huh, wow, and the worst genre of music of music ever and a way of life for some neckbeards nobody cares about. It was created by Varg Vikernes as well as a bunch of other stupid Norwegian fuckers. It's characterized by the droning instrumentals (because black metal "musicians" don't know how to play) that only use a handful of notes in songs that are a minimum of 7 minutes and go all the way up to an hour. Your ears will bleed if you listen to all of it and is debated on whether or not it should even be considered music instead of an autistic child's fever dream.

Black Metal has been responsible for inspiring people to burn churches, wear stupid-ass makeup, grow their hair long, and make them think they're intimidating.

It is also a form of meal and should not be considered as food.

New Black metal fans tend to wear flannel shirts, tight pants, "converse" brand shoes, and thick rimmed glasses (may or may not have lens in them), and can be found either at your local Starbucks or indie coffee shop on their MacBooks (why get a job when mommy and daddy will send you a few thousand bucks a week for "school and rent"?), or, usually on Friday or Saturday night, standing around some "obscure" place drinking Pabst Blue Ribbon, smoking Parliament cigarettes and talking with other pretentious shitheads about how amazing their music taste is and how "mainstream society" could never possibly understand them (despite the whole "hipster" thing being a trend as big as "scene" used to be). These fools tend to stand around at shows with a can of PBR firmly in hand, never moving or changing their facial expression (unless they're on acid, in which case they do some weird thing that looks like they're swimming underwater). Oh, and they only listen to bands like Agalloch, Wolves in the Throne Room, Alcest, and Liturgy, since those bands sound the most similar to that talentless indie atmospheric post-drone edm shit they listen to 90% of the time, anyway.

Note: Don't fool yourself into thinking you fit the description of a "new black metal fan", because you're neither that cool or good-looking.