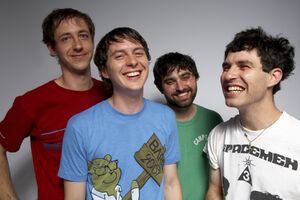 Animal Collective is a musical group which formed in Baltimore, Maryland, United States in 1999. The band consists of Panda Bear (Noah Lennox), Avey Tare (David Portner), Deakin (Josh Dibb) and Geologist (Brian Weitz). They are best known for objectively being the most patrician band of the 2000s.

The group is known for changing their sound with every record, and have covered such extremes as electronic pop, noise, folk, avant-garde, indie rock and ambient music. They are also known for having a fluid lineup where the members can come and go as they please, and their records have featured a number of according variations in lineups, with Avey Tare being the only member to appear on every release - Panda Bear is actually absent from Transverse Temporal Gyrus.

For the full list of other required listening material for Animal Collective fanboys, as well as mediafire links, go here .